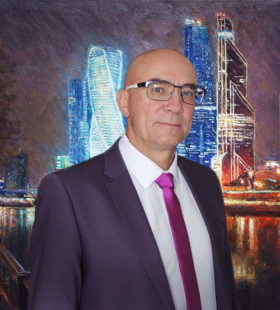 Total rating: 190
Rating by «Painting»: 70
Community ratings by author
Uniqueness of style:-
Originality of work plots:-
Mastery:-
Artist Igor Razzhivin world famous! He is member of the International art Fund, a permanent participant of Moscow, Republican and international exhibitions, and began his active creative activity in 1986. Over the years, formed a strong circle of loyal customers and fans of the artist, and his works were exhibited not only at the annual exhibitions in Central house of artists (Moscow, 1990-2016.), but at other representative sites: U.S. Embassy (Moscow, 1985), at the international exhibition "Artekspo" in Beijing (China, 1998), in the Temple of Christ the Savior (Moscow, 1998). and the Kremlin (Moscow, 2006). During his visit to Japan on 15 December 2016, Russian President Vladimir Putin gave the Prime Minister of Japan Shinzo Abe the painting I. V. Razzhivin "Russian Troika in Kolomna". Today Igor Razzhivin is a successful professional artist for many years fruitfully works in the genre of urban landscape. Each of the artists-realists of his method of work, your search path form, which involves first observation of the surrounding life. Razzhivin real poet of Moscow. Moscow – the first, the main "heroine" of his paintings, Igor perceives and feels the capital-like character of the woman. Under the watchful and kind eye of the artist even with the shortcomings of the city turn into advantages: the crush and noise give way to the bright conviviality and dynamism of being, the traffic lights merge into a Christmas light, and even the rain from the grey clouds gives a feeling of coolness and freshness after the heat of summer. There is no clearly defined subjects, purposely invented stories, but always felt the state of the soul, which in this point of space the once experienced by the author while working on a painting. Transparent or pasty, with a hint of decoration, brushwork Igor Razzhivin always easily recognizable, optimistic and attractive. Special spectators are traditionally used in paintings, which appear quiet streets and courtyards, temples and monasteries of old Moscow, captured by the painter in different time of year. In their reviews about these paintings, visitors often use the adjectives "warm", "cozy", "family". The fact that the viewer is often not only "landscape condition", but that "portrait" of famous buildings with the background, is interpreted depending on the Central image and strong presence. The author has a clear interest in the panoramic view of the city, sometimes using perceptual perspectives. The familiar places from a bird's flight evokes in the audience the desire to be inside the space of the painting, to identify the viewpoint and assess how changing Moscow at different times of day and in different weather, how to change its appearance over time. Fortunately, the architecture of the Russian capital allows to choose an unusual, expressive dominant vertical to panoramic painting, and the artist skillfully uses this, causing us a genuine feeling of admiration for the city with a long history, when built on seven hills. In recent years I. V. Razzhivin pushed the boundaries of their usual roles. Now in his creative output – portraits, still lifes, compositions in the genre of "Nude". The artist is constantly in search intently and respectfully studying nature, constantly strives to enrich the expressive possibilities of painting and, apparently, not going to stop. / Art I. D. Kazachenko 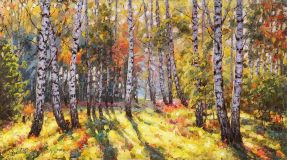 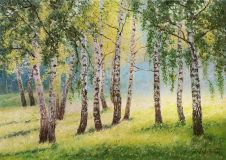 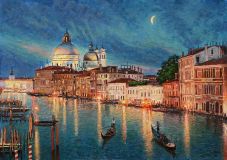 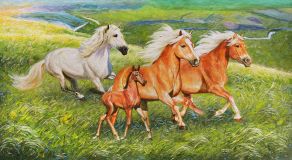 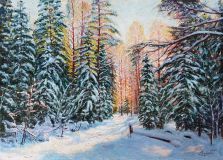 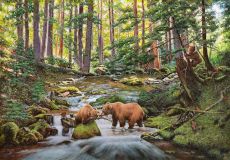 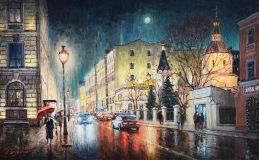 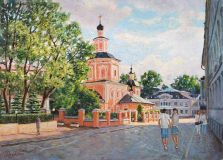