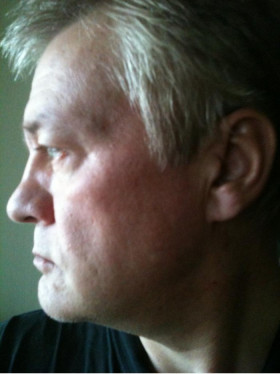 Total rating: 284
Rating by «Painting»: 169
Community ratings by author
Uniqueness of style:5.0
Originality of work plots:5.0
Mastery:5.0
Was born in 1959.
Lives and works in Moscow.
Engaged in painting.
Vocation to be a freelance artist.
In his work adheres to the avant-garde promoting such artistic direction as the Russian Cubo-futurism.
You can appreciate the work that Krotkov Vladimir seeks to revive Russian kubofuturizm, reposed in the Lord in the 30-ies of the last century.
In his works, the author trying, preserving the traditions of the Russian avant-garde of the early 20th century, to develop this style and add your own vision of art.
The methods and techniques of image and art of delivering information:
- The dismemberment and the geometric volumes.
- Shift form.
Decomposition of the object into components of the structure.
- Multiplication circuits.
- Deformation shapes.
- Development of the composition in the fourth dimension, i.e. time.
Project title: the Russian Cubo-futurism 2.0. Restart.
Slogan: Simple things is a difficult style!

Member of the project "the Window in Art of Russia".
2015 Exhibition "Collection only". (Pskov, Saint-Petersburg, Moscow).

2016, may. Exhibition dedicated to the 125th anniversary of the birth of M. A. Bulgakov. Cultural centre "Khitrovka".

2016, July. The winner of the creative contest held by the Moscow state Museum of M. A. Bulgakov to the 125th anniversary of the writer (July 2016).

2016, September. Medalist (2nd place) in the international Internet-competition of artists "My countries."

2016, November. Participation in the exhibition in Moscow state Museum of M. A. Bulgakov

2017 9-12 March. Participation in the international exhibition-competition of contemporary portrait art "Portrait Art Festival International". The project is organized by the world Foundation for the Arts / World Fund of Arts, together with the European art Union / European Art Union. "Moscow House of artists" Moscow, ul. Kuznetsky Bridge, 11.
- "E=mc2" became the winner of the International contest-exhibition of portraiture in the section "Contemporary art".
PS I Wonder what a jury of the contest chose this portrait as the basis of diplomas that were awarded to other participants
- Painting "memory of Yuri Levitanskogo" received a Diploma (3rd place) in International exhibition-competition of portraiture in the section "Contemporary art".

Article from the Ukrainian scientific journal "Young scientist". The article is dedicated to my creativity.
The author, Romanenkova, Yulia Viktorovna - head. the Department of fine arts of Institute of arts, doctor of arts, Professor in the Kiev University named after Boris Grinchenko.
http://molodyvcheny.in.ua/files/journal/2017/1/35.pdf

20 may - 2 June 2017 exhibition "IMPRINT Basil Krotkov" at the project Art space "квАРТира10", NTO the title of the exhibition "Vasily IMPRINT Krotkov" suggested by the article by Yulia Romanenkova, published in the magazine "Young Scientist" • No 1 (41) • January, 2017 and devoted to the artist.

29.08.2017-29.09.2017. Participation in the International exhibition "Fashion people! From constructivism to the design" is a large - scale project 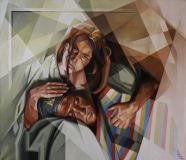 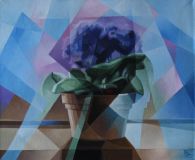 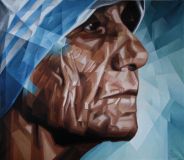