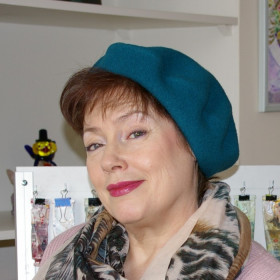 Total rating: 155
Rating by «Painting»: 5
Community ratings by author
Uniqueness of style:-
Originality of work plots:-
Mastery:-
In the childhood liked to draw, probably, like all children. It seems to me that the love of the image inherent in us all initially with the Creator or nature. After all, the ancient people of the red ochre painted on the walls of their caves.
Colored pencils in a large set was my best toy.
Then the passion began to wane. After all, I didn't go into any Studio, not developed in this direction. Moreover, when I went to school and learned to read, the "absorption" of books was my favorite hobby for years to come.
But occasionally I return to my first love. At school during boring lessons, not at all, it was boring for me, I drew, as best I could, his friends, classmates. Moreover, the portrait likeness and there was no smell, but I have come up with different situations in which could be these people, did the signature, gave nicknames, not offensive, and describing, as I thought, some inclinations of the person.
All my pictures on a normal notebook sheet kept my namesake, Ginny. Promised he would keep them and someday will publish a newspaper with these drawings. I don't know where this "girl". And my drawings somewhere in the Universe disappeared.
And maybe it's good. If I would of saw that, maybe would never have come to painting
Then at the Institute of the elective course in descriptive geometry we wish, given the fundamentals of drawing and composition. These seminars conducted in Chelyabinsk we have a talented architect. She's been gone several years.
These workshops fascinated me, I learned to pass the volume of simple objects.
Life dictated its own rules, and listen to the inner voice it once, and then it was not accepted.
Here I became a techie, good with physics and math I had, apparently, genetic attraction.
However, all my life I was attracted to the creativity in any manifestation.
Since childhood, I was knitting some beautiful things, first the dolls, then for myself, then the son while he was little.
Learned to sew just not so much for it to the body to cover how to implement your fantasies
Then became interested in interior design. I read a lot on this topic. Made for your apartment design from scratch, while this milking was possible.
But all were dashed. As I all the time thought were impossible to change everything in my life suddenly.
And yet, in the last 30 years, opened the opportunity to travel abroad, and I still have enough power, went to different museums and art galleries of the world level. And watched, absorbed everything that I could be seen in many illustrations in the books.
And we thought that those who have received in his youth a special art education, they can draw. And my train left.
When retired, time was more, I decided to try to implement a previously unrealized desire. To learn to draw.
Just in our art school has opened courses for adults and "adults".
I went to school, taught us to paint with watercolors. At first I thought that I started to turn something. But then it went slipping. Almost all the show is over, I quickly finished the teacher. In the end, I'm not having studied for six months, left, realizing that here I have nothing to do.
And finally, technical progress has reached and courses in painting. I accidentally found the channel YoyTube lessons artists. First, just who enthusiastically watched.
And then "dived" into oil painting with his head. It turned out that the oil I've got to write. A watercolor I still dearly love, but without reciprocity)) 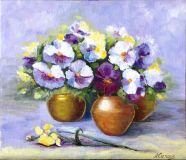 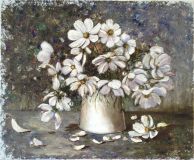