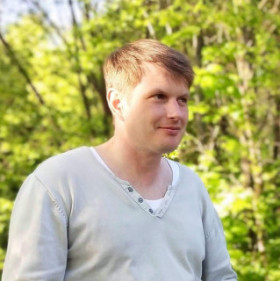 Total rating: 237
Rating by «Painting»: 5
Rating by «Graphics»: 2
Community ratings by author
Uniqueness of style:5.0
Originality of work plots:5.0
Mastery:5.0
Glazkov Denis Y. was born 2 March 1980 in the city of Kharkov, Ukraine. Since 1993 he studied at children's art school № 1 named after I. E. Repin. In 1995 he enrolled in the art Lyceum at the Kharkov art - industrial Institute. In 1997 he entered the Kharkov art-industrial Institute (KHPI), who in 2003 graduated with honors, majoring in "Interior and equipment".
In 1999 appointed to the position of head of the laboratory of decorative painting Department "Interior and equipment". In 2000 promoted to the position of training master of the Department "Interior and equipment". Since 2003 worked at the Department of "Easel painting" of Kharkiv state Academy of design and arts, where he taught the discipline "Painting" for students of the specialty "Interior and equipment". Screenings and discussions of works in the creative threads that held people's artist of Ukraine Kovtun, Viktor Ivanovich, born a warm atmosphere. Unobtrusive and delicate way he passed on his vast experience, based on the best traditions of the realistic school of great Russian artists. Of course, this stage was for Glazkov Denis very important in his artistic development.
Currently, the young artist lives and works in Volgograd. A Member Of The Creative Union Of Artists Of Russia. Painting for him became an integral part of all life. Since 2007, leads an active creative and exhibition activities, the works are exhibited at major local, regional exhibitions and international fairs. His work is distinguished by thick, technique and impressionistic brushwork that was originally selected. what distinguishes his work in the Volgograd palette of art.
In October 2012, attended qualification master classes in painting in the Studio. V. S. Pesikov in Saint-Petersburg (Russian Academy of Arts). Mr Simonovic gave invaluable recommendation tips and directions which help to reveal the talent of each work brighter and brighter.
In November 2015, becomes the winner of the III International exhibition-competition of contemporary art "Belarusian Art Week". His work "the piano Lesson" took 1st place in the nomination "Genre painting classic".
In July of 2016 wins the VIII International exhibition-competition of contemporary art "St. Petersburg Art Week". His work took 1st place in the nomination "the Aesthetics of the Nude / Nude".
In November 2016, wins and becomes a laureate in the International competition of the portrait art in Milan. 1 place in nomination "avant-garde portrait" for work "Young Sophie".
Glazkov Denis is the author of over 700 paintings. They held four personal exhibitions of art works (2011, 2012, 2013, 2014), including a charitable exhibition "In transit..." and "Christmas meeting", the proceeds of which were sent to the speech centre "Discourse" in speech restoration and socialization of the disabled and people with reduced mobility, with severe speech disorders resulting from strokes, etc.
The emphasis in his work Glazkov Denis is doing on urban subjects in which it finds interesting angles, unusual play of light and shadow, every brush stroke, transferring the solar atmosphere and their perception of reality. The author creates canvas of moods, reflecting the emotion and the emotion of the artist.
Artworks of the master
all artworks of the master Glazkov Denis
In which currency should the prices be displayed on the website? 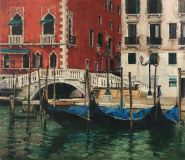 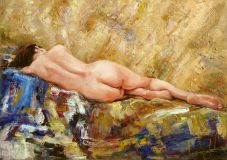